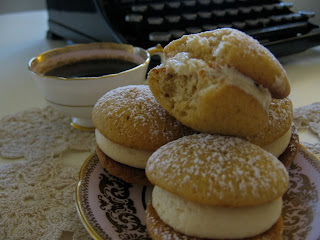 As a general rule, I think most things taste better homemade. Most. There are those few exceptions that, no matter how hard I try (or sometimes, simply don't!), I just can't beat the store bought experience. Until recently, doughnuts were in this category. Another: the ginger kiss. Has anyone tried the supermarket variety? How do they get the sponge so soft?! And light. And gingery! I've tried a variety of recipes, some with vanilla cream, one with honey (which actually worked really well), and reading through Philip Johnson's 'Eating In', I discovered a partnership with espresso that I simply couldn't deny. So, on this lovely rainy day, I tried to replicate that beautiful texture once more. 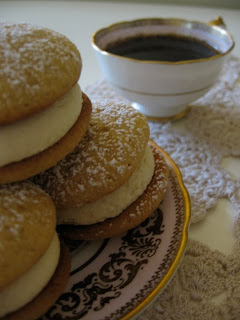 Preheat oven to 200C. Grease and line two baking trays with baking paper.
In the bowl of an electric mixer, cream together the butter, sugar and golden syrup until light and pale. In a separate bowl, sift together the dry ingredients. Gradually add the beaten eggs to the butter mixture, alternating with the dry ingredients, mixing well to combine.
Pipe mixture onto trays using a 1cm plain tube - use about 1 tsp of mixture for each. Bake for 10 minutes until lightly golden, and cool completely on trays.
For espresso cream, cream the butter and icing sugar in the bowl of an electric mixer until light and pale. Add the espresso and mix well - I ended up using about 4 tsp for a stronger taste and added some more icing sugar to balance the texture. Spread or pipe cream onto the base of a ginger kiss, and sandwich with another biscuit. Dust with icing sugar to serve. 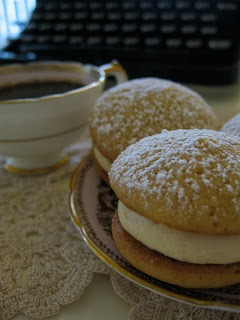 The end result is surely the closest I've come to the store-bought variety. It's a lovely and simple recipe, and the espresso flavour is fantastic, though I added a little more than suggested. However, I will still be a frequent consumer of supermarket kisses. They're just too smooth and soft to say no to.
Recommended baking soundtrack: Lower Dens - Twin-Hand Movement.
Posted by Amber at 7:08 PM