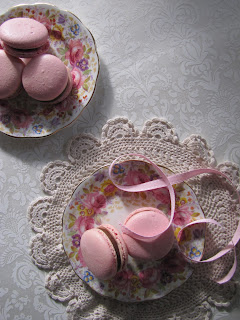 I am by no means a health nut. I like gentle exercises: pilates, yoga, swimming... does strolling count? I do fall off the pilates wagon every once in a while and can go through lengthy periods of times without "exercise", but console my inner couch-potato by reminding myself that I have a fairly physical job. But over the weekend, I felt physically unfit for the first time in as long as I can remember... whilst folding a double batch of macarons. Due to an unintentional baking hiatus, I have lost my ability to hand-whip potatoes, whisk cream and most importantly, fold macaron batter the many times it requires to become beautiful and shiny. I pride myself on this ability. I am thoroughly devastated.

Despite my now sore right arm, these are my favourite macarons of the year, largely due to a new oven. Each are sandwiched with a rose infused, whipped dark chocolate ganache, and contain a small bite of turkish delight in the centre. 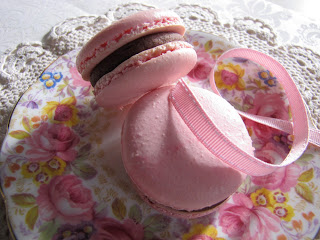 For the macarons, mix the ground almonds and icing sugar together and pulse a few times in food processor to make almond meal finer, being careful not to over-process and release the oil in the almond meal. Sieve into a large bowl. Add colour and 55 gms of the egg whites to the sugar/almond mixture but do not mix in.

Place remaining 55 gms of egg whites in bowl of mixer fitted with the whisk.

Place white sugar and water into saucepan stir to combine and cook without stirring to 118C. Once the mixture reaches 115C start mixing the egg whites on high. Once the sugar syrup reaches 118C remove from heat and immediately pour in a thin stream down the side of the mixer bowl continuing to whisk on high. Continue to whisk the meringue on high until the side of the bowl is only a little warm to touch. The meringue mixture should be beautifully glossy.

Add meringue mixture to almond mixture and using a large spatula fold the mixture together until it starts to shine and forms a ribbon that stays visible for about 30 seconds.

Add the mixture to a piping bag fitted with a plain tip and pipe in lines onto baking trays lined with baking paper. Tap trays on the bench a few times to eliminate any air bubbles.
Set aside for about 30 minutes or until the macarons have formed a skin that doesn't stick to your finger.

Meanwhile preheat oven to 140C . Bake the macaroons for around 13 to 15 minutes depending on size, they should not be browned. Remove the baking trays and immediately slide off the macarons and the baking paper onto the work surface and let cool completely before removing the shells.

For ganache, finely chop chocolate and place in a the bowl of your electric mixer. Place cream and rosewater in a small saucepan, and heat until it just begins to boil. Pour hot cream over the chopped chocolate, cover with a dinner plate (or saucepan lid, or... anything) and leave for 1 minute. Stir mixture until smooth, and allow to cool for ten minutes. Add 1 cup icing sugar to ganache, and whip using paddle attachment until smooth and slightly lighter in colour. Add more icing sugar until desired consistency - the mixture should just be able to hold its shape when piped, but should also be glossy-- about 1 1/2 cups of sugar should do.
Place whipped ganache in a piping bag fitted with a plain 1cm tip, and pipe half the macaron shells with a dollop of filling. Top with a piece of turkish delight before sandwiching with remaining halves. 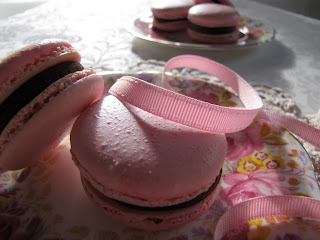 Macarons are apparently better a couple of days after being filled, and prior to this recipe, I can't say I've really had many lying around after that point to really know the difference. I made these in the evening and had my first taste the morning after and could already taste how the flavour had developed and permeated the shell. So, if you can wait that long, fill them and leave them for at least a few hours, or a day if you are really self disciplined. 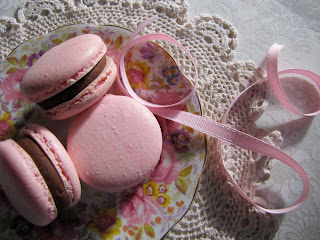 Recommended baking soundtrack: Laura Marling - I Speak Because I Can.
Posted by Amber at 7:34 PM