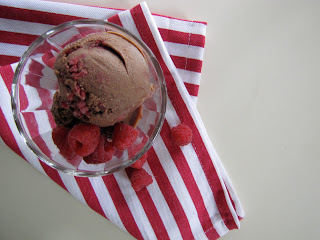 I've spent too many baking ventures being trumped by the heat and humidity this summer. Macarons have spent hours drying on my kitchen table, and pastry has been quickly shoved rather than rolled and neatly pressed into tart tins. No more! I have stopped fighting it. I am now - ugh - 'going with the flow'.
I recently read a wonderful article in February's AGT, written Peter Gilmore and Adriano Zumbo, including their hilarious reviews of store-bought ice cream varieties. What I found interesting was reading about Gilmore's take on what constitutes a good, creamy ice cream, particularly in terms of cream to milk ratios and how people can achieve this at home. So, after reading that pure milk based ice creams are become too icy in home made, slow churners, I became curious with a recipe I've had bookmarked for a while. 100% milk base.
Ingredients (makes approx 1.6L)
Recipe from AGT online
750 mls milk
5 egg yolks
275 gms caster sugar
150 gms chocolate (70% cocoa solids), coarsely chopped
240 gms raspberries, plus extra to serve
2 tbsps raspberry liqueur 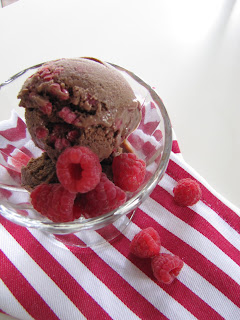 Place milk in a medium, heavy-based saucepan and bring almost to the boil. Place yolks and ¾ cup of the sugar in a bowl and whisk until thick and pale, then gradually whisk in hot milk. Return mixture to same pan and stir over low heat until mixture thickens enough to coat the back of a wooden spoon. Do not boil. Remove from heat and add chocolate, stir until melted, then strain through a fine sieve into a bowl. Allow to cool.

Combine raspberries, liqueur and remaining sugar in a small saucepan and stir over medium heat for 10 minutes or until thick and jammy, then press through a fine sieve and discard seeds. Cool.

Freeze chocolate mixture in an ice-cream machine according to manufacturer’s instructions, add raspberry mixture and swirl through ice-cream, then place in freezer and freeze until firm. Serve scoops of ice-cream scattered with fresh raspberries. 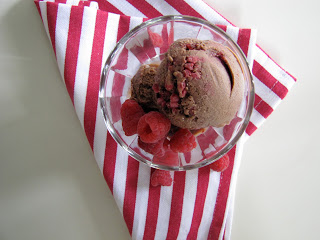 Call my taste buds naive, but I love the result of this particular recipe. Yes, it's a little icy in spots, but not very grainy at all. With a milk base, it's chocolate flavour is also very distinct and by no means does it have an oily flavour as a high cream-based chocolate ice cream might. I ended up dropping some fresh raspberries in with the coulis, which meant with every bite you'd get a pocket of tart raspberries to cut through the chocolate. It's a quick and incredibly easy recipe using ingredients most cooks would have at home. And using frozen raspberries won't matter at all.
Recommended 'baking' soundtrack: M. Ward - End of Amnesia.