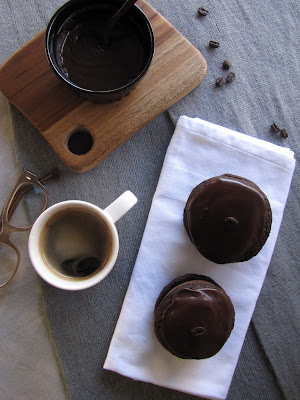 Being so in love with a few favourite food magazines has resulted in a pretty high expectation from cook books. Mathematically, the ratio of recipes I quickly lust over is generally much higher per page for magazines than it is the new cookbooks I encounter. This is sad, though I'm not sure it's entirely my fault. Firstly, new issues of magazines have the luxury of being relevant to Seasons. How can I not love a Donna Hay full of stews and puddings when it's a mere 15 degrees outside?! Secondly, the wonderful people in my life that have given my subscriptions have taken away the need for me to long for new recipes. I have been utterly satisfied in my temporary cook-book-less, yet still thoroughly delicious, life. But, I really did used to pride myself in knowing almost all new baking books to hit the shelves. It was almost impossible for someone to recommend me a book of sweet treats that I had not already seen.

So, when I recently saw a friend pick up a copy of 'Let's Make Whoopies' by Sophie Gray, I knew I had lost my touch, after living with my head in the glossy pages of epicurean magazines. I love whoopie pies! I should have seen this book's release coming a mile off. So, I got hold of a copy and was so surprised in my desire to if not make, at least eat every recipe within.  Seriously, I flicked from cover to cover at least a dozen times and my shortlist was still about 10 recipes. Thankfully, my better half chose this following mocha recipe, and how could I say no? 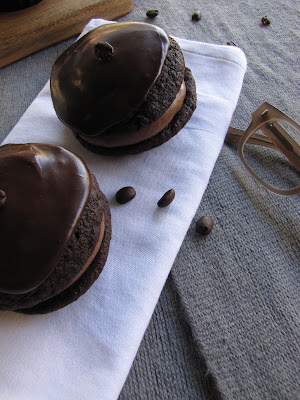 For the sponge whoopies, preheat the oven to 200C. Line two baking trays with baking paper. Sift the flour, cocoa powder and bicarb soda into a bowl. Mix together the buttermilk, vanilla and coffee. Set aside.

Cream the butter and sugar in an electric mixer until pale. Gradually add the egg, scraping down the sides of your bowl after each addition. With the mixer on low, pour in buttermilk mixture. Fold the flour mixture through with a large metal spoon, being careful not to over-mix.

Place mixture in a piping bag fitted with a plain 1cm tip, and pipe eight even mounds of mixture onto each baking tray, giving them plenty of space. Bake for 9 minutes - they will still be very soft to the touch, so cool on oven trays completely. 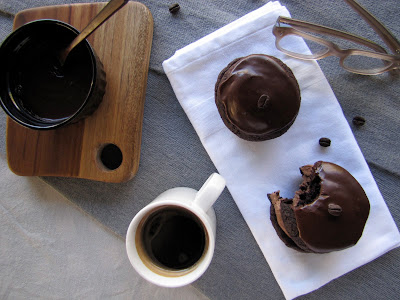 For the filling, mix the cream cheese and butter together in the bowl of an electric mixer until light and creamy. Add the cocoa and icing sugar and mix slowly until just combine. Slowly pour in the espresso while the motor is running, and continue to mix until smooth and spreadable.

For the topping, sift together the icing sugar and cocoa. Gradually add the espresso a little at a time, mixing between additions. The mixture should be smooth and slightly runny like honey, but still firm not to run straight off the whoopie. Spread topping onto half of the whoopies and top with a coffee bean, if you like. Allow to set slightly.

Pipe the filling onto the remaining, un-iced sponges and sandwich with the iced halves. 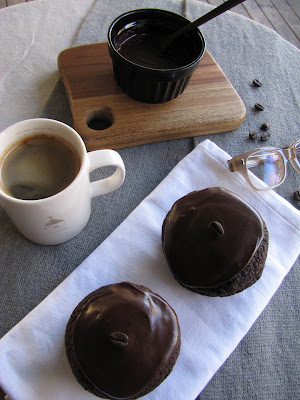 The other chocolate whoopie pie recipe I've made stresses the importance of using vegetable shortening to achieve a soft, un-cracked whoopie sponge, so I was curious to see how this recipe turned out. Sure, they crack slightly (what cake doesn't?), but they are still incredibly moist and soft. I don't know if I could pick a favourite recipe, but it helped that I had all the ingredients in my fridge and pantry for this one. The cream cheese filling is also a great combination to the sponge, which is really quite rich.

It's also worth mentioning that Sophie includes a lot of savoury, gluten-free (and low gluten) and egg free varities of whoopies.