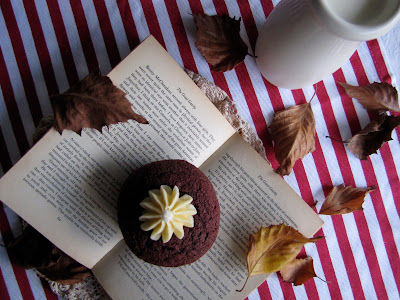 While documenting my previous whoopie baking day, I came across a back shiny ball of fur in my backyard, which has been a little neglected since the weather has cooled. Scared that it was a creature, and that this creature may be dead, I sent my boyfriend down to poke and prod before I wanted to know what it was. Thankfully, it was alive, and most importantly, it was a cat! I adore cats dearly, and miss one in particular so much on a daily basis and this little (well, rather large) visitor was so much more than welcome. I spent what felt like two minutes - but what was probably more accurately about thirty minutes - sitting in my backyard patting and swooning over this handsome cat. Now,  I might have been cat-drunk, but it was during those moments that I realised how beautiful my backyard had become, full of dead leaves and Winter light.

The following weekend, I re-created the experience. Same time of day, but different whoopie recipe.
I'm quite ashamed to admit that I've never made red velvet anything - cupcakes, layer cakes... nothing. And so, red velvet cake came into my life. The cat didn't come back that day, but has another time since, and that's good enough for me, for now. 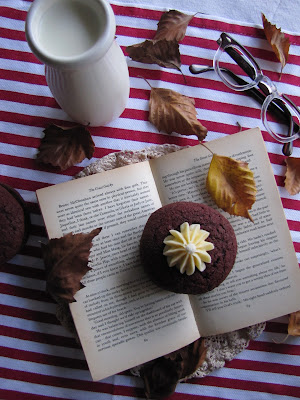 Sift the cocoa, flour and bicarb soda into a bowl. Mix buttermilk, vanilla and food colouring and set aside.

Beat the butter and brown sugar in the bowl of an electric mixer until pale and creamy - scrape down the sides of your bowl regularly. With the motor running, slowly add the egg and mix well until completely combined. Fold in the wet and dry ingredients with a large metal spoon, being careful to not over-mix. If mixture is too dry, add more buttermilk with caution. The mixture should be quite thick, almost the consistency of smooth peanut butter.

Place mixture in a piping bag fitted with a 1cm plain tip, and pipe eight even mounds of mixture onto each baking tray, leaving plenty of space between each to spread whilst cooking. Bake for 9 minutes - they will still be very soft to the touch, so cool completely on trays. 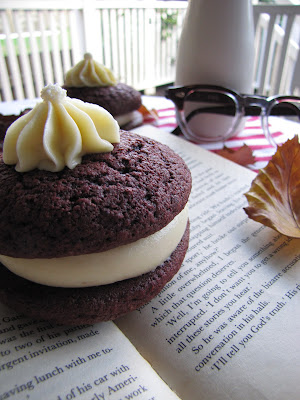 For filling, mix cream cheese and butter together in the bowl of an electric mixer, fitted with the paddle attachment, until smooth. Add vanilla, then gradually spoon icing sugar into mixture while motor is running. After 1 cup has been added, increase speed until mixture is smooth and silky. Add more icing sugar if needed, a little at a time, until you get your desired consistency - because I was piping mixture on to the tops of each whoopie, I wanted mine quite firm.

Pipe filling onto half of your cooled whoopies, and sandwich with remaining halves. Change your piping bag's tip to a closed star, and pipe a small dollop onto the top of each whoopie. Top with a sugar pearl, flower or... anything you like. 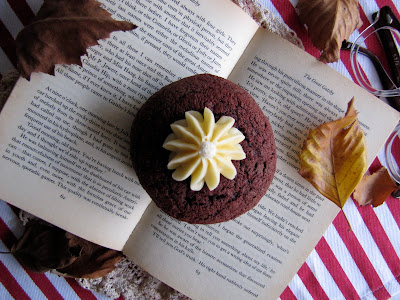 In retrospect, I probably would have put more red food colouring into the mixture, but was taken over by the need to eat them as soon as possible. I haven't added an amount to the recipe so you can be the judge of how intense you want the colour to be, especially because it will vary dramatically depending on if you're using liquid, gel or powder.
Recommended baking soundtrack: Micah P Hinson - Micah P. Hinson and the Red Empire Orchestra.
Posted by Amber at 7:17 PM