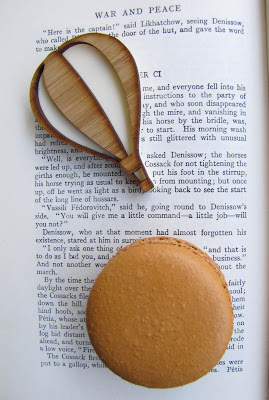 In case you hadn't noticed, it's been a while. I've been busy. Everyone's been busy. Where the heck has this year gone etc. I suppose it doesn't really matter, does it?

Isn't it a comforting feeling to have a favourite recipe? A recipe you've made so many times that you measure ingredients and move through the method automatically, without really even being conscious of the steps? One that you can feel confident will turn out just as it did the last time: perfectly. It's a fail-safe, a tried and true, an old friend.

I've had a long relationship with macarons that spans a couple of years now--almost as long as this blog. With each new recipe I've tried, I've been convinced that it's "the one". And I've tried a few. But somehow, I always come back to this recipe. Sure, it takes a little longer than some recipes that don't require a sugar syrup, and maybe the processing and sifting is unnecessary, but I know what I like. And this is it. This is my old faithful.

The caramel recipe is just as wonderful. I usually make it the day before, and have it sitting in the fridge ready to go. And yes, okay, alright, it usually has traces of spoon marks through it before it makes it onto the macarons. Don't judge me. Seriously, this stuff would make a great gift on its own. 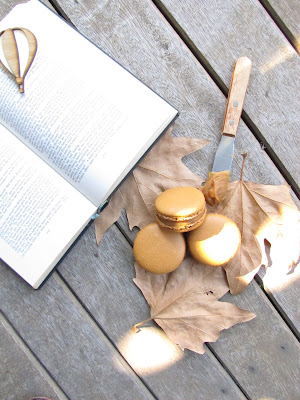 For the salted caramel, place the sugar in a medium-sized, heavy-based saucepan over a medium heat. Despite every instinct commanding you to stir, allow the sugar to caramelise before you even touch the pan. As soon as you see little patches starting to melt and caramelise, turn the pan and give it a gentle shake if necessary, and maybe a gentle stir with a wooden spoon every now and again. This part, although intimidating, can be quite forgiving.

Meanwhile, heat the cream in a small saucepan, but remove from heat as soon as it starts to boil.

When the sugar has reached a dark golden colour, remove it from the heat and slowly pour in the hot cream whilst mixing. Place pan back on a very low heat, and whisk until the mixture is smooth. Remove from heat and allow to cool for about ten minutes. Add butter, one piece at a time, while whisking. Pour the caramel into a shallow container and chill until thick.

When you're ready to use the caramel, add as much salt as you'd like, and mix it vigorously with a spatula until smooth.

For the macarons, mix the ground almonds and icing sugar together and in small batches, pulse a few times in food processor to ground the mixture finer. Don't go too crazy processing, as it releases the oils in the nuts and you'll end up with a paste. Sieve into a large bowl. Add colour and 110 gms of the egg whites to the sugar and almond mixture, and mix to combine. It will be quite a paste.

Place remaining 110 gms of egg whites in bowl of mixer fitted with the whisk attachment.

Place white sugar and water into saucepan stir to combine and cook without stirring to 118C. Once the mixture reaches 115C start mixing the egg whites on medium-high until they are foamy and almost forming soft peaks. Once the sugar syrup reaches 118C remove from heat and slowly pour in a thin stream down the side of the mixer bowl continuing to whisk on high. Continue to whisk the meringue on high until the side of the bowl is only a little warm to touch. The meringue mixture should be wonderful and shiny.

Add a dollop of the meringue mixture to almond mixture. This will loosen the mix up and make it easier to fold through the rest. You don't need to be gentle.  Your final mixture should be a shiny, oozy batter. I've heard it described as a similar consistency to lava before, and though never personally witnessing lava before, I would surely have to agree.

Add the mixture to a piping bag fitted with a plain tip and pipe small rounds onto baking trays lined with baking paper. If you need to draw circles on the reverse side of the baking paper to be consistent, then go right ahead. Tap the trays firmly on the bench a few times (for some unexplainable reason, I do it six times :/ ) to eliminate any air bubbles. Set aside for about 30 minutes or until the macarons have formed a skin that doesn't stick to your finger. This will largely vary due to temperature, especially varying levels of humidity!

Meanwhile preheat oven to 140C . Bake the macaroons for around 13 to 15 minutes depending on size-- they should not be browned. Remove the baking trays and immediately slide off the macarons and the baking paper onto the work surface and let cool completely before removing the shells for the paper.

Fill a piping bag fitted with a plain tip with the salted caramel. Pipe onto macaron shells and sandwich together. 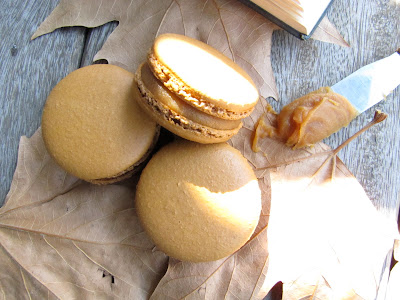 Favourite recipes are good at making you feel good. Even if you're busy, or stressed, or unwell, there's comfort in the familiarity of making something that you know will be awesome. It's an ego boost. And as lovely as macarons are, and as many flavours as I've tried to inject into them, I'm confident that this one is my favourite. This recipe is a huge ego boost ;)