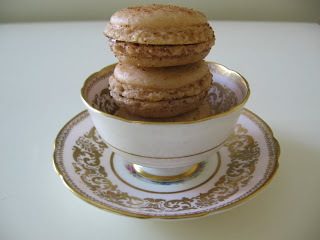 I've tried so, so many macaron recipes - mostly ending in a product that was entirely edible and delicious, but not as handsome as I expected. You can hardly be surprised with the inconsistencies with a traditional macaron recipe: Some recipes call for double sifting icing sugar and almond meal; some don't. Some say to lightly press on the piped mixture with wet fingers; some don't. Most interestingly, some insist the piped mixture rest at room temperature for at least two hours before going into the oven; and some don't. After all of my experimentation, crushed dreams, heartaches and tears, I found my go-to recipe, courtesy of Australian Gourmet Traveller's 2009 French issue. I felt like I had accomplished something in life, albeit a small (but delicious) something.

Since that issue, I've intended on being a little more adventurous with flavours, but I just didn't find the time. This changed when I got my hands on a copy of 'Macaron' by Alison Thompson. This book has me in heaven, and I intend to prolong this sense of the afterlife by trying all 35 recipes. Kind of like Julie Powell, but with less curse words, not as much ambition and with a more lazy and as yet undefined timeframe. We'll see.

First, I bring you gingerbread.

Ingredients (makes 30 macarons, depending on the size)
Recipe taken from 'Macaron' by Alison Thompson

150 gms milk chocolate, chopped
150 mls pouring cream
2 strips orange zest
1 cinnamon stick
1 star anise
1 clove
2 cardamom pods
pinch of nutmeg
3 tsps honey
1/2 vanilla bean, split and seeds scraped
For filling, melt the chocolate over a double boiler. Pour the cream into a small saucepan and add the orange zest, cinnamon, star anise, clove, cardamom, nutmeg, honey, vanilla pod and seeds.
Bring to the boil, the remove from heat and stand for 10 mins. Strain the cream, then reheat until hot. Pour it over the chocolate and stir until smooth.
Refrigerate the filling until firm enough to hold its shape.
Line two baking trays with baking paper.
Combine the icing sugar and almond meal, and sift together twice, discarding anything remaining in the sieve.
In the bowl of an electric mixer, beat the egg whites on a high speed until stiff peaks form. Add a small amount of brown food colouring to egg whites, and mix until colour has evenly spread through mixture.
Fold the sifted sugar and almond meal into egg whites, continuing to fold until the mixture is glossy and moves slowly when the bowl is tilted. It's not necessary to be too delicate with the egg whites - it's most important that the mixture is nice and smooth.
Spoon the mixture into a piping bag fitted with a 5mm plain piping tube. Pipe rounds 3cm in diameter onto the baking tray, spacing them 2 - 3cms apart. Sprinkle shells with nutmeg. Tap the trays firmly on the bench a couple of times to knock out any air bubbles.
The macaron shells must now sit at room temperature until a crust forms - this will take 2 - 6 hours, depending on the temperature of the room (the warmer and drier the room, the faster the drying process will be). When they are ready, you should be able to touch the tops slightly and have no mixture stick to your finger.
Preheat oven to 150C fan-forced.
Place macaron shells into the oven and immediately turn the temperature down to 130C. Bake for 10 - 12 mins, until firm to the touch but not coloured. Remove from the oven and allow to cool completely before carefully removing from oven trays.
Spread or pipe cooled and thickened filling onto half the shells, and sandwich with remaining shells.
The final product sure is a delicious one. I cooled the ganache for about 4 hours, but it was still only slightly thicker than pouring consistency for me. Next time, I might increase the chocolate ratio to get a thicker and less oozy layer of ganache.
The most important step is the resting: both this recipe and AGT's call for it - and these are by far the best recipes I've ever tried. For this reason, making macarons just can't be an impulsive decision. Follow the recipe by the letter, and I'm sure you'll be in lust with the results. 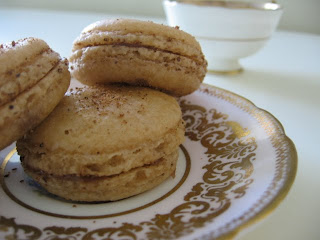