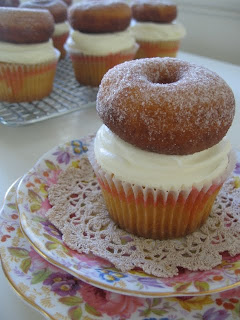 I have a crippling fear of spiders, heights and baking with yeast. I understand the first two are dreadfully common and don't need justifying.

I think I'm an incredibly patient baker. I'm fine with complex, multi-step recipes. No sweat having to wait for things to completely chill, or bringing syrups to exact temperatures. Pastry is a-okay. But yeast? With all the kneading, and punching. Rolling and waiting. And waiting again. And again. I resigned myself to the fact that the only yeast products I would be consuming would be store-bought. That was, of course, until I received a copy of Australian Gourmet Traveller's June edition, featuring eight pages of doughnut bliss.

Starting simple, I've made doughnuts to sit atop some strawberry jam filled cinnamon cakes. This was no speedy process, and I did spend my afternoon in cycles of making a mess, cleaning the mess, and waiting between each step. However, I can't believe how much fun it all is! To cut that fluffy elastic dough into the cutest little rings and to later watch them swell up as they're dropped into hot oil had me in heaven. I'm already planning my next doughnut day. 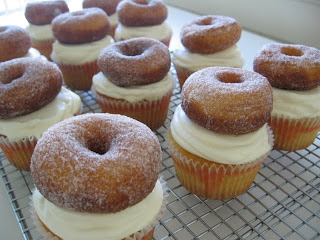 1/2 cup caster sugar
1 cup self raising flour
2 tbsps milk
2 eggs
1 tsp vanilla bean extract
1 tsp cinnamon (more with caution if you wish)
2 tsps strawberry jam
300 mls thickened cream
2 tbsps icing sugar, sifted
1 tsp vanilla bean paste
For doughnuts, combine flour, sugar, butter, yeast, eggs, half the flour and a pinch of salt in the bowl of an electric mixer fitted with a dough hook. Beat on medium speed until smooth and combined (about 4 - 5 mins). Add the remaining flour a little at a time, beating until dough is smooth and elastic and no longer sticks to the bowl (about another 4 - 5 minutes). Transfer dough to a lightly buttered bowl, cover with plastic wrap and stand in a warm place until doubled in size (1 - 1 1/2 hours).
Meanwhile, for cakes, preheat oven to 180C/160C fan-forced. Place 12 paper cases into a 12 capacity cupcake tins.

Place all ingredients (excluding jam) in the bowl of an electric mixer, and beat until just combined. Increase speed, and beat until mixture is creamy and paler in colour. Spoon mixture among cases. Bake for 20 minutes, until golden. Remove cakes from tin immediately, and allow to cool completely on wire rack.
For doughnuts, knock back dough, then roll out on a lightly floured surface to 1cm thick. Cut out 4 - 5 cm rounds with a floured cutter, then cut a hole in the centre of each with a large pastry tip (about 1cm). Transfer doughnuts to two light floured baking trays, allowing space in between to rise. Cover with a tea towel and stand for 45 mins - 1 hour until risen. 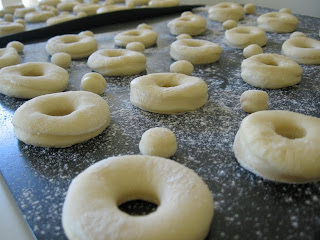 While doughnuts are rising, fill cooled cupcakes. Using a small sharp knife and - holding your knife at a 45 degree angle - slice a circle into the top of a cake. Set lid aside for later. Repeat with remaining cakes. Fill holes with strawberry jam and replace with lids, trimming them down if necessary so lids sit flush with cake tops.
To finish off doughnuts, combine extra caster sugar and cinnamon in a large bowl. Preheat oil in a deep sided saucepan to 180C. Deep-fry doughnuts in batches, turning occasionally until golden. Be careful when lowering them into the oil as oil may spit. Drain on a paper towel on a wire rack while frying remaining doughnuts. Toss doughnuts it cinnamon sugar. 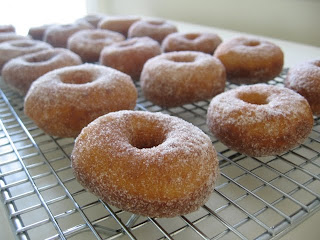 To finish off, beat cream, icing sugar and vanilla until soft, silky peaks form. You want it to just be able to hold it's shape but still be velvety smooth. Spread generously onto cakes, and top with a fresh doughnut. 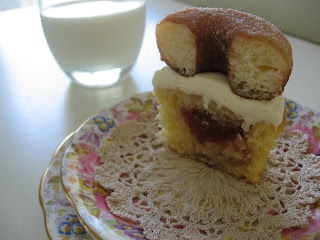 I know this all looks long and too involved, but I'm a convert: making your own doughnuts is incredible rewarding. These chubby little golden babies have such lovely, crispy exteriors but are so much lighter than the store bought variety. Despite being somewhat terrified of deep frying (I seriously started off wearing safety goggles), the oil doesn't spit but fizzles as you drop the batter in. It's really quite satisfying and dreadfully exciting to watch.
I imagine these doughnuts would also taste gorgeous on a vanilla malt cake. Or covered in chocolate on a mudcake for a more 'grown-up' affair. Or just mushed whole in your mouth without the cake!
Note: despite these cakes having a bit of resilience, the doughnuts are best eaten the day of making. They're obviously still edible a day after if stored in an airtight container, but the sugar will begin to break down. Worse things have happened.
Recommended baking soundtrack: Animal Collective - Feels (or their entire catalogue if you're going through the with whole recipe :/ )
Posted by Amber at 2:49 PM