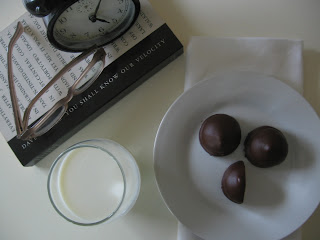 As I type this, I'm seeing the first peak of sunshine we've had in four days. I was lucky enough to have a rare three day weekend to myself after a very busy couple of months, and I only had one thing planned: nothing. The rain was a nice companion to stop me from feeling guilty to stay inside, but was also a motivator to bake some cookies. "I'm going to bake some cookies", I say to my lovely boyfriend. "Oh yessssss!", he replies. You see, I never bake cookies. Well, rarely ever.

After flicking through books and magazines all morning, I had a break with a cup of tea, read some food blogs, and of course stumbled on tartelette's blog, which is a common time waster for me. Here, after trawling through many pages, I found some chocolate covered marshmallows, a recipe that came from a daring baker's challenge. What really got me excited was the pairing of chocolate, marshmallows and PEANUT BUTTER! However, I decided to stick to something familiar - raspberry jam - in an attempt to recreate and improve on one of our favourite cookies: the wagon wheel. My version is a little chubbier, and therefore more tasty. Of course! 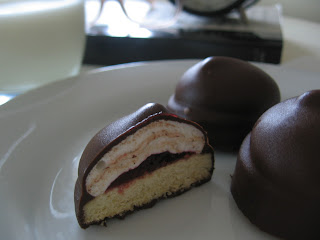 For the cookies, beat butter and icing sugar with an electric mixer until pale and creamy. Scrape down the sides of the bowl, and add flour and cornflour, stirring until a soft dough forms. Turn onto a lightly floured surface, knead until just smooth and form into a disc. Cover with glad wrap and refrigerate for 30 minutes.

Preheat oven to 160C. Roll out shortbread on a lightly floured surface until 5mm thick. Cut 4.5cm diameter rounds and place on baking trays lined with baking paper. Refrigerate until firm, then prick cookies with a fork and brush lightly with egg white. Bake for 8 - 10 minutes until cookies are lightly golden, remove from oven and cool completely on trays before moving to a wire rack. Dollop a small amount of raspberry jam in the centre of each cookie (about 1/4 tsp).

In a medium saucepan, combine the water, corn syrup, and sugar, bring to a boil until it reaches soft-ball stage, or 115C on a candy thermometer. Sprinkle the gelatin over the cold water and let dissolve. Remove the syrup from the heat, add the gelatin, and mix. Whisk the whites with an electric mixer until soft peaks form and pour the syrup into the whites. Add the vanilla bean paste and continue whipping until stiff. Transfer to a pastry bag. Pipe marshmallow onto each cookie, then allow to sit at room temperature for 1 - 2 hours. You want to marshmallow to begin to set, which will make it easier to coat in chocolate glaze.

Melt the chocolate and 1/4 cup vegetable oil together in a bowl over a saucepan of simmering water. Add more oil as needed until glaze is as runny as desired. I lost count at how much I used, but am guessing it was about 1/2 cup. Adding too much runs the risk of the glaze sliding off your marshmallow peaks, not to mention your chocolate tasting oily, so add gradually and with cautio. Allow to cool for 10 - 15 mins.

Line a tray with baking paper. One at a time, gently drop the marshmallow-topped cookies into the warm chocolate glaze. Lift out with a fork and let excess chocolate drip back into the bowl. Place on the prepared trayand let set at room temperature until the coating is firm, about 1 to 2 hours. 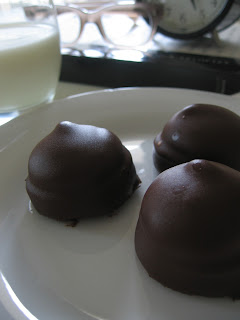 I was admittedly very nervous fully submerging ﻿the marshmallow topped cookies into the still warm chocolate, but they're very resilient! I was impatient and set mine in the fridge, as you can see by their frosty exterior, but I liked the choolate with a bit of crack. I will definitely be doing some more experimenting with this lovely recipe in the near future.
Recommended baking soundtrack: Fresh & Onlys - Play It Strange (this album is so, so good).
Posted by Amber at 4:45 PM