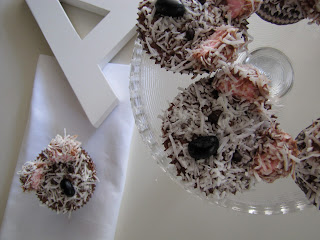 Summer has finally arrived, a month or two late. However, I am not saying "finally" with any sense of relief. I love warm afternoons and evenings if a fan is present, but humid days are not my cup of tea. In fact, it makes it very difficult to enjoy my cup of tea. My Australia Day celebrations - aside from including a day off work - involve no tradition or routine. This year I decided to bake some treats for my new-ish coworkers, as if I needed an excuse.

Lamingtons usually require a chocolate glaze-esque coating covered in coconut, and despite this being my intention, found my cakes a little less rounded than I would have liked. I stuck with a buttercream merely so I could make chubby charactier-ridden koala faces, rather than sad, lifeless, two-dimensional faces. You get the idea. Go with whatever works for you, your cake results and your taste-buds.

For the chocolate buttercream, whip butter in the bowl of an electric mixer fitted with the paddle attachment until smooth. Add cocoa and about 1 cup icing sugar and beat on a low speed until combined. Increase speed and beat until smooth. Add 1 tbsp of the milk and the remaining icing sugar and beat until creamy. Add remaining milk until desired consistency - you want a smooth, fluffy buttercream.

Generously frost each cupcake with chocolate buttercream, leaving about 2 tbsps aside. Place coconut in a shallow bowl and dip each iced cupcake into the coconut to coat. Decorate with a jellybean nose and two crunchy pearl eyes.

For the koala ears, cut each marshmallow in half lengthwise. Thin the remaining butercream down with a few drops of milk, and with a small palette knife, coat the outside edges of each mallow-half in chocolate frosting and then toss in coconut. Your ears should be moist enough to stick onto the cakes, but if they have trouble sticking on, secure with a dab of buttercream mixture. 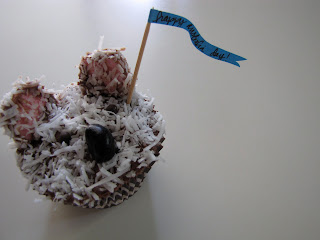