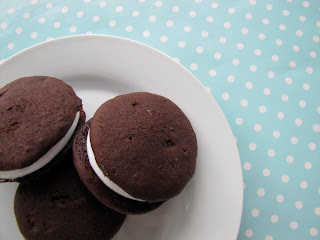 Baking trends are a funny thing. To make cupcakes ten years ago involved a vanilla cake with buttercream, possibly including coloured sprinkles for those feeling adventurous. Few people had tasted proper French-style macarons let alone churned them out of their own home kitchen. And now, the whoopie pie. Ah, the whoopie pie... I'm not sure if this delightful cake-biscuit hybrid (also known as moon pie) has hit Australia with as much momentum as cupcakes, macarons or cake (or cookie!) pops, but there's certainly no reason why it shouldn't, especially with books out there whose sole purpose it is to teach us the very basic tricks to the perfect whoopie.

I've been put off making whoopie pies for a while now, simply because I was convinced I would eventually stumble across the marshmallow fluff suggested to make the perfect filling. This obviously didn't happen, and here I was months later, whoopie-less. Buttercream is a possibility, but just doesn't quite fit. Melting marshmallows with cream works, but just isn't the same. But! The closest and possibly even better filling is one of my favourite frostings: a marshmallow frosting that holds its shape and is very easy to inject flavour into. Of course, I chose peppermint.

One last thing before the recipe: I know vegetable shortening (Copha is perfect) seems like a funny addition to a cake that already contains butter, but it really adds lightness to the cake and makes it incredibly soft. It also helps avoid your whoopies having cracked surfaces. So please, trust the recipe. 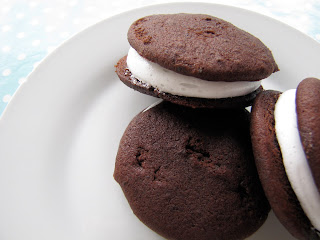 Sift together the flour, cocoa powder, baking soda and salt. In the bowl of an electric mixer fitted with the paddle attachment, beat butter, shortening and brown sugar on a low speed until combined, then increase speed to medium and beat until light and fluffy - which will take at least three minutes. Add the egg and vanilla, and beat for a further two minutes until fully incorporated.

Drop 1tbsp quantities of batter onto baking trays, leaving about 5cm between each whoopie, as they will spread when cooking - you will obviously need to do multiple batches, so be generous and give your first lot of whoopies (I just love saying whoopies!) lots of space to grow during the first time around. You can always squash them together a little more after some experience. Bake for ten minutes - one sheet at a time - for about ten minutes. The pies should spring back when pressed gently, like any sponge. Remove from the oven and let them cool on the baking sheet for about five minutes before transferring to a wire rack to cool completely before filling.

For the marshmallow filling, combine the egg whites, sugar, corn syrup, cream of tartar and 100 mls water in a heatproof bowl (preferably the bowl of your electric mixer to save on washing up). Sit the bowl over a saucepan of simmering water, and whisk quite vigorously for five minutes until mixture is light and foamy-- this will feel like a very long five minutes! Alternatively, if you you have handheld beaters, you could use these - it will save you time and sweat. Remove from heat. Add peppermint and beat with electric mixers on a high speed until stiff peaks form.

Generously pipe, spread or dollop marshmallow filling onto half of the whoopies. Allow to set for five to ten minutes before sandwiching them with the remaining whoopies. This will allow the filling to set slightly. Eat & enjoy. 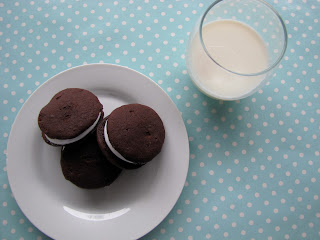 These can be tricky to store, as the cake becomes very sticky quite quickly. It is suggested they are eaten on the same day as being made, but I consumed one the day after and thought they tasted even better. Just make sure you don't stack them if you can help it, and if you can't, place a layer of baking paper in between to prevent them from sticking to one another.

Recommended baking soundtrack: Built to Spill - There Is No Enemy.
Posted by Amber at 6:48 PM