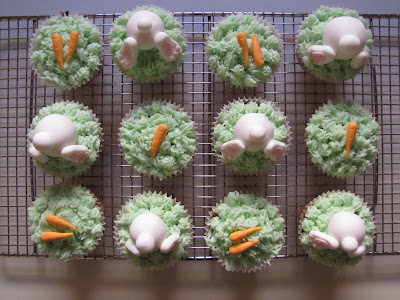 Forgive me: I am not in the least bit religious. At all. But Easter is my version of baking heaven. Sure, Christmas is great, with Santa and things of a sparkly nature, but what could be better than pastel colours, baby animals, flowers and an abundance of chocolate?! And despite living in the Southern hemisphere, starting to feel the evenings cool and watching the leaves turn brown instead of green, I am still forever compelled to make something cute and Spring-inspired. Usually, I would have had something planned weeks in advance, but this year, Easter has really snuck up on me. Realising that it's now less than a week away has left me feeling like I've missed out on so many adorable baking opportunities. So over the weekend, I was desperately trying to think of something cute and not too time consuming to make, and I just… couldn't. I don't know came over me, quite honestly. I was utterly uninspired. 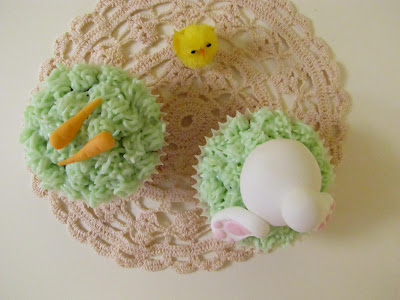 After hours of being frustrated, intermittedly killing time looking at pretty dresses online and stopping for multiple tea breaks, I decided to decorate cupcakes using a grass tip, which I've been dying to do for a while now. Now, I don't even remember the last time I made cupcakes… so in order to make them as cute as possible, I burrowed miniature fondant bunnies into the grass-topped cakes, leaving their cute little bottoms exposed. I then realised my Easter cake last year also featured a rabbit's bottom, and who can blame me?! There are few things are cuter than a rabbit's backside. 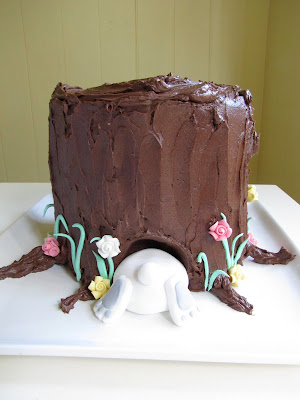 Of course I wanted to make carrot cupcakes to go with anything rabbit related, despite the overwhelming urge to do something painfully chocolatey. And these cakes are oh so easy! They're light and fluffy and simply wonderful, and only use one bowl. It's been way too long since I've had carrot cake. Feel free to add walnuts or pecans if that's your thing, but I'm a carrot cake purist. No nuts allowed.

Firstly, make the decorations. These are really easy, albeit a little time consuming. I made enough rabbits for half of the cakes, topping the remaining with little carrots. The rabbit bottoms were about 4cm in diameter, and the tales about 1cm across. In retrospect, I would have done some bunny ears to poke out of cake tops, too.

For the cakes, preheat your oven to 180C and two standard 12 capacity cupcakes tins with cupcake liners.

Whisk together the oil, eggs and vanilla. Add the remaining ingredients and mix until combined. Divide mixture evenly amongst prepared cases-- approximately two tablespoons of mixture per case works out perfectly. Bake for 20-25 minutes, until golden brown. Allow to cool completely.

To make the cream cheese frosting, beat the cream cheese and vanilla in the bowl of an electric mixer until smooth. Add the sifted icing sugar, and beat at a high speed until add a good piping consistency, adding more icing sugar if necessary. Add green food colouring very sparingly-- a little goes a long way-- and with a piping bag fitted with a grass tip, cover each cakewith tufts of grass.

Top cakes with a burrowing bunny, or a couple of carrots. 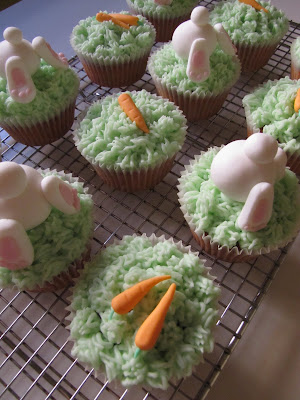 As I was decorating, I longed for some oreo crumbs to make the carrot-topped cakes look more like small garden beds. This concept would also be adorable on a large cake, too, with bunny bottoms and ears sticking in and out of burrows on the surface of the cake. Oh, cake regret! I suppose there's still four days until Easter Sunday...