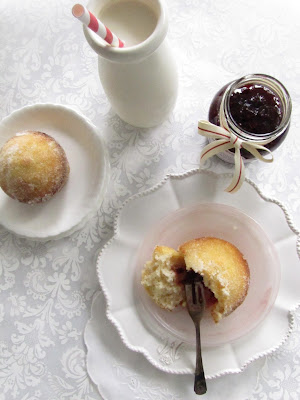 It's been a while since I've felt utterly in love with a new cookbook. Where I have swooned over the whole contents of a book, cover to cover, rather than just a few recipes out of many. Where the photography and styling are perfect, and the recipes are well written. I think the last was Meg Ray's Miette, and considering that was almost a year ago, it was about time something else came along to make my heart all aflutter. I saw the front cover of Tea With Bea, and became instantly smitten. I spend hours pouring over food magazines and cookbooks. Honestly, hours. I have a method that I rarely deviate from that consists of much excited flicking, followed by at least one good full-reading. And I was so very excited when I first sat down with this book. Every layer cake looks even more beautiful than the previous one, and oh, do I have a weakness for layer cakes.

As beautiful as these each recipe is, it feels almost criminal that this is the first recipe I've made from this book, simply because of the other recipes that were competing for my attentions. That and these cakes are just so damn easy to make! If you have a sweet, cakey craving that needs to be filled quickly, look no further. I've included my recipe for a quick raspberry jam, but if you were to use a good store-bought jam, you could have these in your mouth within the hour.

I was slightly reluctant (well, for about three seconds) to make these when I read to the part about rolling the warm cakes in butter. I love butter as much as the next person (okay, probably more than the next person), but I really thought a butter bath would make these cakes heavy, but it surprisingly doesn't. I think they're as doughnutty as a cake could possibly be. 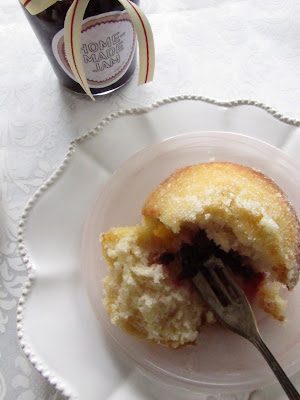 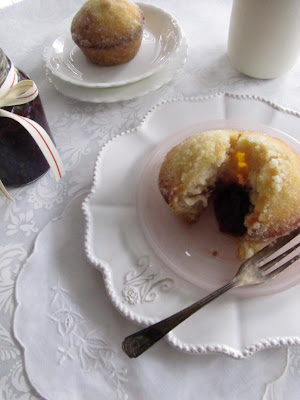 If you're making your own quick raspberry jam, place the berries and lemon juice in a small, heavy-based saucepan, and simmer for five minutes, stirring constantly. Bring to the boil, add vanilla bean and seeds, and allow to bubble for five minutes without stirring. Add the sugar, stirring until dissolved and continue to boil for a further two minutes until slightly thickened and jammy. It will still be a fairly runny jam, but this is okay for these cakes. Remove vanilla bean and allow to cool while you make the cakes.

Combine all dry ingredients in a large bowl. Add wet ingredients, and stir until just combined. Do not overmix, or your cakes will be heavy.

Bake in your preheated oven for about 20-25 minutes, keeping a watchful eye. Cakes should be lightly golden, and a skewer inserted into the middle of each should come out mostly clean, perhaps a bit crumby.

Immediately remove cakes from pans and onto your work space. Submerge cakes, one at a time, into melted butter before rolling in caster sugar.

Fill prepared piping bag with jam, and push the nozzle into the centre of the underside of each cake, and fill each with jam until you can feel and see that’s it's full-- you'll see jam start to ooze out when you're filling it if it's taken as much as it possibly can.

These are best eaten as soon as you're finished filling them, as they'll still be warm, but they're still wonderful as they've cooled down and the jam starts to become absorbed throughout the crumb of the cake. They may not be as light tasting as a doughnut, but how can a hybrid of two of my favourite things in this world possibly be a bad thing? I can only imagine they'd be just as wonderful filled with chocolate sauce, too... 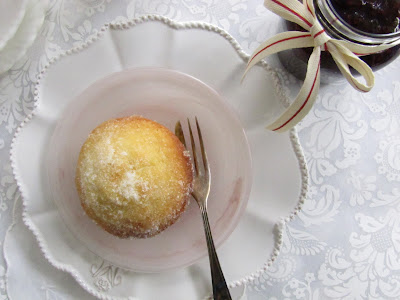