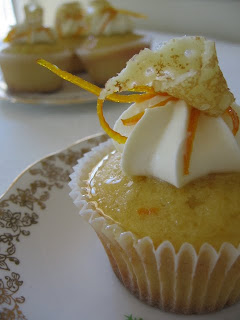 Sigh. My last possible opportunity to use Bastille Day as an excuse. Honestly, I feel a tad exhausted, having also committed to other baking projects during the week. But aside from this, I still have recipes up my sleeve and painfully wish this week could be stretched out another few days. No profiteroles! No macarons! Millefeuille! Criminal, I'm aware. But on this final day, at this late hour, I bring you crêpe suzette cupcakes.

I feel a little ashamed to admit there was no flambé-action. But I did take as many of the flavours and textures of the traditional dish as I could when turning them into a cupcake-- orange, alcohol and crêpes, of course.

Preheat the oven to 180C. Place 12 cupcake cases in a 12 capacity cupcake tin.

Place the butter, sugar and orange zest in a small saucepan and stir over a low heat until sugar has dissolved. Transfer to a large bowl of an electric mixer. Add the eggs, flour and milk and beat until just combined.

Divide the mixture evenly among cases and bake for 15 minutes, or until a skewer inserted into the centre of the cakes comes out clean. Transfer to a wire rack to cool.

To make the lemon syrup, place the alochol, sugar and 125 mls of water in a small saucepan. Stir over a low heat until sugar has dissolved. Add the orange zest, bring to the boil, and simmer for 10 minutes, stirring occasionally, until syrupy. Strain syrup into a heatproof bowl or jug, reserving candied rind.

For whipped cream, place cream, icing sugar and vanilla in the bowl of an electric mixer and beat until almost stiff peaks. Just until the mixture holds its shape, but is still soft and velvety. Nothing is worse for piping on cakes than over-whipped cream. Pipe the cream onto cakes using a piping bag fitted with a large star-shaped tip. 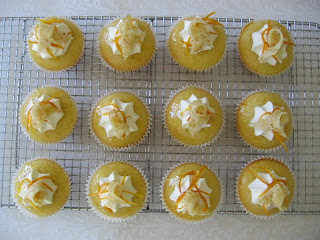 For crêpe, sift flour into a large bowl, making a well in the centre. Whisk milk and eggs in a jug with a fork to combine. Add to flour mixture and use a whisk to stir, gradually drawing in flour to make a smooth batter. Stir in 1/2 tablespoon of butter. Cover. Set aside for 30 minutes.

Heat an 18cm (base) crêpe pan over medium heat. Brush with a little of the remaining butter. Pour 2 tablespoonfuls of batter into centre of pan and swirl quickly to coat base. Cook for 2 minutes, or until golden and lacy. Turn and cook for a further 30 seconds. Transfer to a plate. Cover with foil to keep warm. Repeat with remaining batter, if using, greasing pan in between crêpes. Dust with icing sugar.

Cut a crêpe (or more, if needed) into ribbon strips, about 1cm wide and 5cm long.

To finish cakes, place a few strips of candied orange peel onto each cream peak. Top with a ribbon of fresh crêpe. 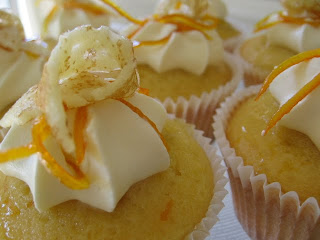 My boyfriend ate two of these it one sitting. As much as he loves cake, it seems I'm always ordering him to eat more to get as many opinions as possible, and this - this eating without encouragement - is a rarity, so I take that as a compliment. I think the alcohol content in the syrup could be increased slightly. Tasting the syrup itself lead me to believe it was perfect, but when infused throughout the cake it loses a bit of its sharpness. I suppose this will always come down to individual taste, but just keep this in mind.
So this is it. The end. My apologies for brutally destroying French tradition. Avec amour. 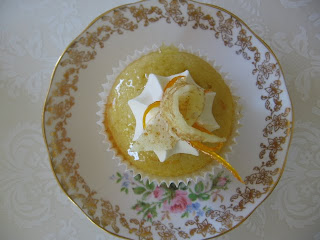