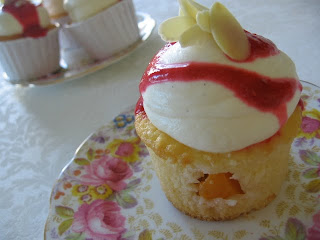 Despite being a French creation, this dessert cupcake really isn't suited to a southern-hemisphere Bastille Day celebration. I desparately wanted to use fresh poached, blushing peaches, but you make do with what you have! Tinned peaches and frozen raspberries. Shame, really.

Named after the Australian opera singer, Dame Nellie Melba, Peach Melba was created by French chef August Escoffier around 1892. It generally consists of ice cream topped with with peaches and raspberry puree. For this cupcake version, I've taken a lovely sour cream cupcake batter and plopped a tinned peach half on top before baking. The crème Chantilly tastes an awful lot like the flavours of a nice vanilla ice cream, and the raspberry puree gives a much needed tartness. Top with flaked almonds, if you like.

Sift the flour into a large mixing bowl, the add the coconut and make a well in the centre. Melt the butter and sugar in a small saucepan over low heat, stirring until the sugar dissolves. Remove from the heat.

Whisk the combined and peach juice into the sour cream. Add both the butter and the egg mixture to the well in the dry ingredients and stir with a wooden spoon until combined.

Divide the mixture evenly among the cases, and place a peach on the top of each cake. Bake for 20 minutes, or until a skewer inserted into the middle of the cakes comes out clean. Remove cases immediately from the cupcake tin and allow to cool on a wire rack.

For crème Chantilly, beat cream, icing sugar and vanilla until thick, creamy and almost at stiff peak stage. You want the mixture to be able to hold its shape, but still be velvety smooth.

For raspberry puree, process all ingredients in a food processor until combined.

To finish, pipe cream onto cakes using a piping bag fitted with a 1cm plain tip. To get a dome-shape, hold the piping bag about 1cm away from the surface of the cake, and keep directly centered. Gradually move your hand further away from the cake as the dome grows.

Spoon over raspberry puree and sprinkle with some toasted, flaked almonds. 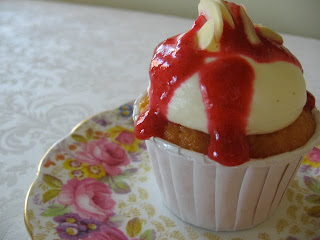 With the addition of both peach juice and sour cream, this cake recipe is beautifully moist and the coconut goes almost unnoticed. I made these with gluten-free flour for my co-workers and they turned out perfectly. My peaches also sank to the bottom, disappointingly but expectedly. If you'd like them higher in the cake, try tossing them in flour before placing them in the batter. My recipients, however, liked the surprise they discovered at the bottom of the cake.

The recipe for the puree will yield a lot more than what is required, but can be kept in a container in the fridge for a few days, or even frozen for later use. 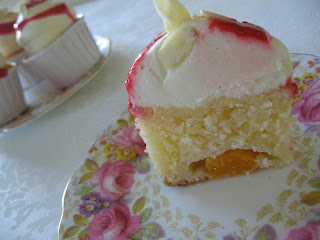