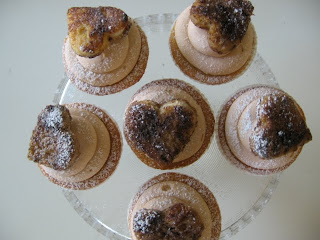 As much as I hate the term 'francophile', I love all things French, both stereotypical and otherwise. So, in celebration of Bastille Day this Wednesday 14 July, I'll be filling my button cake with a week's worth of french-inspired recipes! By saying 'french-inspired' I'm obviously leaving myself room to bastardise traditional signature dishes and avoid criticism about not being truly authentic. Please forgive me!

My first entry is definitely a perfect example of me disappointing the French, with a recipe that technically has little to do with France aside from its name. But with a name like 'french toast cupcakes' can you honestly blame me?

This recipe is adapted from a fantastic book by Xanthe Milton, otherwise known as Cookiegirl. 'Eat Me!: The Stupendous, Self-raising World of Cupcakes and Bakes According to Cookie Girl' features some positively original recipes, divided by season, for beautiful cupcakes and cookies-- her Halloween ideas are truly inspiration.

Sift the flour, baking powder, cinnamon and salt into a bowl. Melt the butter and let it cool slightly.
In a large bowl, whisk the sugar and eggs together, then add the melted butter. Mix the vanilla, maple syrup and milk in a separate bowl. Stir the flour mixture into the egg mixture. Add milk mixture, and beat until well combined.

Divide the mixture evenly amongst the paper cases, filling each to be about three-quarters full. Bake for 20 mins until a skewer inserted into the middle of cakes comes out clean. Remove cakes from the cupcake tin immediately and allow to cool completely on a wire rack.

To make the icing, beat the butter and cream cheese in the bowl of an electric mixer until smooth. Add the icing sugar, a third at a time, beating thoroughly after each addition. Add the cinnamon with the last of the icing sugar, and tint icing with brown food colouring to be a subtle, warm brown. 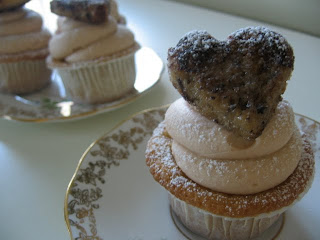 For french toast, beat the eggs together with the vanilla and cream. Heat the butter in a non-stick frypan over a medium heat. When butter is sizzling, dip the brioche slices in egg mixture, the place in the pan. Cook the brioche for 2 mins on each side, or until golden and crispy. Dust with cinnamon.

Using a small cutter (I used a 4cm heart shape), cut 12 shapes from french toast. Place on each cupcake, and dust with icing sugar. 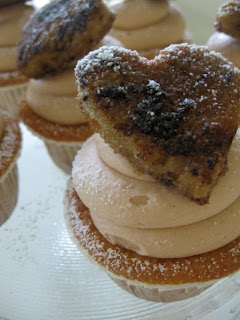 I intended to make my little french toast toppers into toast shapes, but this proved far too fiddly without a cutter.  Even without the french toast to top, these cupcakes still have a surprisingly beautiful french toast flavour. Best eaten as soon as possible, obviously!

Thank you to my dear friend Nicole for introducing me to this recipe.

Recommended baking soundtrack - Moriarty - Gee Whiz But This is a Lonely Town.