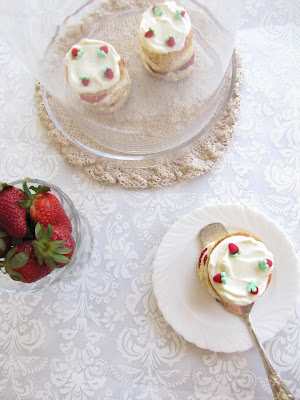 For someone who has no children or dependents--excluding a recently acquired, mischevious rag doll cat-- and little other responsibility, I have managed to let days become weeks and months, and it's gotten to the point where I'm ashamed to mention my 'blog' to anyone. I refer to it conversation more of a point of embarassment, rather than a living, evolving part of me as it once was.

Despite this, I have still been baking with fervour, and taking photos of things I have created and forced upon co-workers and family members, despite these photos merely sitting on my computer, neglected for months on end. I have no doubt spent what would be days making macaron varieties, deviating from my favourite recipe, trying a couple of new techniques. There has been lady grey, maple and pear, key lime pie, and a recent trial of a savory variety: parsley and herbed goats cheese, which took some people by surprise. I've fallen in love with swiss meringue buttercream, and have imposed ruffle cakes on unsuspecting people at any given ocassion. I've ran a cake decorating workshop at work to an adorable group of ladies who still tell me that this has changed their lives. And I've also fallen back on many traditional and reliable recipes that have long been neglected. It has, admittedly, been nice to cook to eat and not to blog. But I have missed this.

I made these sponge cakes a while ago, on one of those days that I wanted something traditional and reliable. But of course, everything looks much more sweeter and desirable to me when it's a miniature version of it's usual self. You can use any old sponge cake recipe, but I've included the go-to recipe that I love. Fondant strawberries are so painfully easy to make with a small amount of fondant, so it was criminal not to use them. 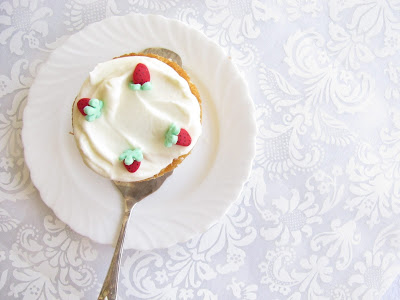 100 gms strawberry jam
Strawberries (about a dozen), washed, and sliced thinly with a small, sharo knife.
Preheat your oven to 180C. Brush one lamington tin or square cake tin with melted butter and then dust sides flour. Tap upside-down over your sink to remove excess flour.

Triple-sift flour (it does make a difference!) into a large bowl and set aside.
Whisk eggs, sugar and vanilla seeds in an electric mixer until thick, pale and tripled in volume, which should take approximate 8 minutes.
Sift the flour over the egg mixture once more, in three batches, folding each batch in with a large metal spoon. Gently fold in melted butter.

Pour the mixture into your prepared tin and bake until lightly golden, about 20 minutes. The centre should spring back when pressed lightly with your fingertips, and the surface should not be sticky. Remove from oven and gently run the blade of a knife around the edges of the pan. All to cool for a few minutes before turning out onto a wire rack. Remove baking paper, and turn back over to cool completely.

Once sponge has cooled, cut nine rounds from the cake using a 4-5cm cutter. Slice each round horizontally with a small sharp knife, to create 18 rounds. Spread two-thirds of the rounds with strawberry jam.

Whip cream in the bowl of an electric mixer with icing sugar and vanilla bean paste until light and fluffy. Spread onto the jam-covered rounds, and top with sliced strawberries. Start stacking cakes, finishing with a plain round, to make six three-layered cakes. Finish each cake with a generous spread of cream, and deocrate with small fondant berries, if using. 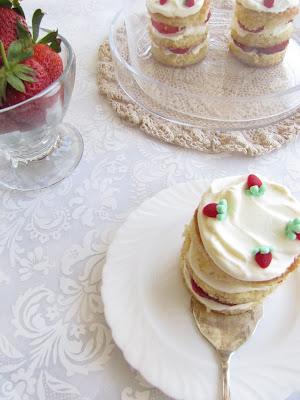 I'm going to keep posting those recipes that I've made and loved in my hiatus, as well as plenty more than I have stashed away with the burning desire to try. I have missed this. I've missed sharing recipes, and more than anything else, reading other blogger's recipes, too. Luckily, blogging is forgiving, especially if you do it mostly for yourself, which I do, but thank you nonetheless to any of my readers who have tolerated and will (hopefully) forive my laziness.

Recommended baking soundtrack: Magnetic Fields - Love at the Bottom of the Sea.
Posted by Amber at 3:38 PM