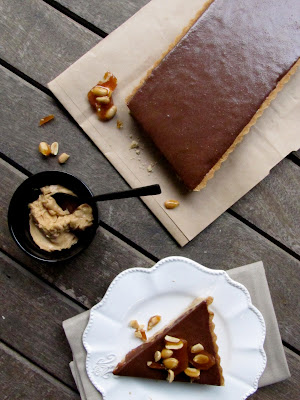 This recipe marks a reunion of sorts. Despite the last recipe I posted being from Australian Gourmet Traveller, we’ve actually had months apart. Admittedly and perhaps unsurprisingly, I make more or their desserts than anything else. Most of my favourite issues of this, my cooking bible, have been those that have had extensive dessert features, or even one impressive, towering cake, and the last few issues just… haven’t really beckoned me. And then last week from across the supermarket, I saw a glossy cover featuring double chocolate lamingtons and fell in love all over again. I’ve missed you in my life, AGT.

This recipe sure is a way to make up for lost time. Much the same as the raspberry and rhubarb tart, it’s by no means difficult. No fancy ingredients or techniques, just time and patience.

The recipe suggested serving this with caramel popcorn, and I gasped in delight when I saw the pictures, but I just couldn’t bring myself to do this. It seemed too much, even for me. I could, however, strangely convince myself that homemade peanut brittle was a better option, which is insane considering the increased sugar content and addition of butter, but I still maintain that this is a better choice. 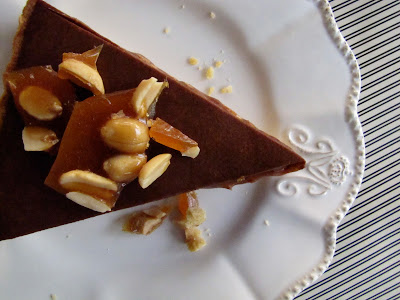 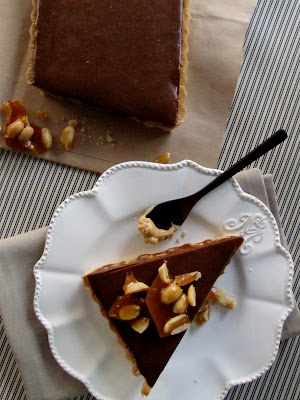 For the pastry, process the flour, brown sugar and a pinch of salt in a food processor to combine. Add butter, and process until mixture resembles fine crumbs, and add egg yolks. Process until combined and sandy-looking. Turn the mixture out onto a lightly floured surface and bring together with the heel of your hand. Wrap in plastic and refrigerate for an hour to rest.

Roll out pastry on a lightly floured surface to about 3mm thick, large enough to cover the base and sides of a tart tin of your preferred shape. I used a fluted rectangular tin, measuring about 30cm x 15cm. Lightly grease tin and place pastry in the tin, trimming the edges. Refrigerate to rest for a further hour. Preheat your oven to 180C.

Line the pastry with baking paper and pastry weights, and blind bake for 10-15 minutes until lightly golden. Remove paper and weights and bake for a further ten minutes or until dry and crisp. Allow to cool completely, and then carefully spread the base with peanut butter.

While tart is cooling, roast the peanuts for about 5 minutes until golden. Chop coarsely.

For the filling, stir sugar and 80mls water in a small saucepan over medium heat until dissolved. Increase heat and bring to the boil without stirring until mixture is a dark caramel colour. Remove from the heat and add butter, cream and 1 tsp sea salt—it will bubble away quite furiously at this point. Return to a low heat, and stir for a few minutes until smooth. Stir in peanuts, and allow to cool for about 15 minutes before spreading mixture into tart shell over the peanut butter. Refrigerate until set, approximately 3 hours.

For whipped chocolate ganache, stir cream and chocolate in a small saucepan over medium heat until melted and smooth. Whisk egg yolks and sugar in a heatproof bowl over simmering water for about 5 minutes, until thick and pale.
Remove from heat, fold through the chocolate and cream mixture, and whisk in an electric mixer until cooled, about 5 minutes. Pour into the tart shell over the peanut-caramel mixture. The mixture will be quite runny, but will set in the fridge after about 3 hours, and will be this delicious mousse-y consistency. I had 2 cups of this beautiful stuff leftover. I’m sure you won’t be complaining, but you could halve the mixture if you like and should still have plenty. 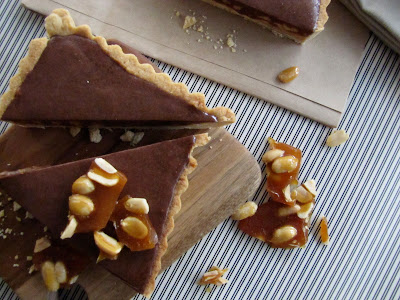 While tart is in its final stages of setting, make the peanut brittle. Combine the sugar and water in a small saucepan over medium heat. Stir until sugar has dissolved, and then increase heat to high, brushing the sides of the pan down with a wet pastry brush to stop any crystallisation around the edges. Cook without stirring until mixture is a dark caramel, remove from heat and stir through butter. Return over a low heat and stir for a minute until thick and smooth. Stir through peanuts, and pour onto prepared baking tray. Allow to set-- this will only take an hour or so.

Remove tart from the fridge about fifteen minutes from serving. Smash peanut brittle into smaller pieces, and scatter generously over the tart. After a while out of the fridge, the peanut caramel filling will start to ooze a bit, so it’s not the best for travelling, but it’s still delicious at room temperature, just as it is straight from the fridge when the caramel is wonderfully chewy.

My grandmother used to make a peanut and caramel slice with a biscuit base that I simply couldn’t get enough of as a child. I’m sure grandmothers all over the country made this slice, or a version of it. Whilst I never really saw her make it, I knew it was pretty easy for her to make given the frequency that I seemed to be eating it, but as much as I loved it, I never thought to make it myself after she passed away. I hadn’t tasted her peanut slice in over ten years, but as soon as I took one bite of this slice, I thought of her. And sure, I’ve gone way over the top with the moussey ganache and brittle, but the essence of what made my grandmother’s slice so wonderful is here. I wonder what she would think. 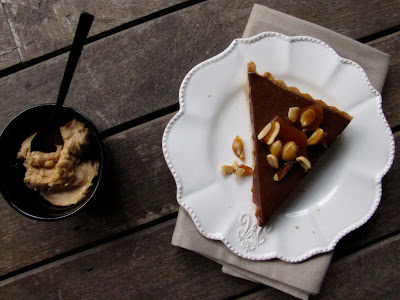