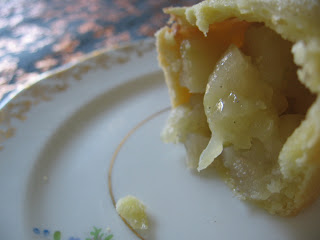 Confession: I'm a perfectionist. Aren't we all, at something? When it comes to cooking, baking, making, I like to be neat. Organised. I like things to look fancy and fine, if possible. For this reason, I tend to steer clear of sweet treats with "character", ones that are clumsy looking, even in an endearing way. Imperfection is not an option.
Don't get me wrong, I love beautifully homemade-looking things. There's nothing nicer than a receiving a charming and imperfect cookie, an oozy piece of slice, or slightly crooked cake. I just… don't tend to make any of them very much, to the disappointment of many around me who just prefer the simple things. So, I recently made a heart-warming apple pie. Well, miniature, adorable apple pies. That still counts, right? 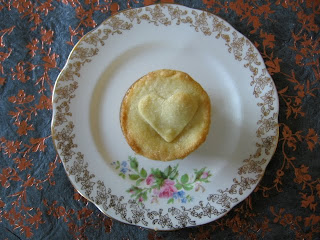 Ingredients (makes 6)
Recipe courtesy of August issue of Delicious
For pastry:
1 2/3 cup plain flour
1/3 cup caster sugar
150 gms unsalted butter, chopped
1 egg yolk
For filling:
1 kg green apples, peeled, cored and cut into 1cm cubes
1/2 cup caster sugar
1 vanilla bean, split and seeds scraped
1 tbsp cornflour
1 tbsp milk
For pastry, place the flour, sugar, butter and a pinch of salt in a food processor and whiz until fine crumbs form. Add yolk and mix until mixture comes together to form a ball. Enclose pastry in plastic wrap and chill for 30 mins.
For apple filling, place apple, sugar, vanilla pod and seeds in a saucepan with 1/4 cup water. Cover and cook and a low heat for 5 - 8 mins or until apple is tender. Discard the vanilla pod. Mix the cornflour with 1 tbsp water until smooth, then stir into the apple mixture for a minute until juices have thickened. Transfer to a bowl and allow to cool.
Preheat oven to 190C. Grease 6 holes of a 12 capacity loose-bottom cheesecake pan (or a texas muffin pan). Roll out pastry on a lightly floured surface until 2 - 3mm thick. Using a 12cm cutter, cut six rounds to line each hole. Divide the apple mixture among the holes.
Re-roll out the remaining pastry again to 2 - 3mm thick. Cut six 8cm rounds for form lids. Brush the edges of each tart with water before placing lids on and pressing around edges to seal. Brush with milk and sprinkle with caster sugar.
Bake pies for 30 mins or until lightly golden. Remove from oven and allow to cool for ten minutes before removing from pan. 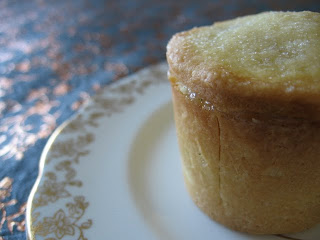 Although I resigned to the fact these little pies would not be perfect, I was still slightly disappointed with one or two of them, who simply refused to come out of the trays without becoming squished. What better reason than to eat them warm, straight from the oven, so I have no evidence to later remind that I'm a mere human, afterall.
Best served with cream and a dusting of cinnamon, and taste fine reheated a few days after making.  I had a small quantity of apple mixture remaining after I had used all the pastry, so cut down on a few apples to a few shy of a kilo if you wish.
Recommended baking soundtrack: Horse Feathers - House With No Home.
Posted by Amber at 12:00 PM