I will always, always choose tea or tea flavoured items over coffee. Because of this, I just never got tiramisu. Now, I know tiramisu is more than just coffee flavoured sponge, but it is so often done wrong you can hardly blame me. That was all until a lovely friend took me to Cafe Sopra in Waterloo. It was then and there that my opinion and affections for tiramisu changed for the better.
This little cake comes nowhere near my Sopra experience. I've seen many incarnations of tiramisu in cupcake form, but a lot are underwhelming. At the very least, this cake is just a good tiramisu should be: simple. Martha Stewart's sponge recipe originally called for cake flour, but I've substituted with gluten-free plain flour, and due to it's cornflour-ish texture, I think it works perfectly. 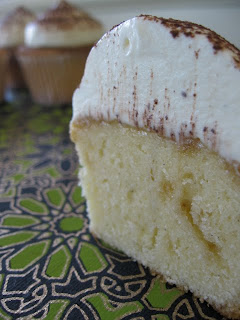 Sift together cake flour, baking powder, and salt. Heat milk and vanilla-bean pod and seeds in a small saucepan over medium heat just until bubbles appear around the edge. Remove from heat. Whisk in butter until melted, and let stand 15 minutes. Strain milk mixture through a fine sieve into a bowl, and discard vanilla-bean pod.

In the bowl of an electric mixer, whisk together whole eggs, yolks, and sugar. Set mixing bowl over a pan of simmering water, and whisk by hand until sugar is dissolved and mixture is warm, about 6 minutes. Remove bowl from heat. With an electric mixer on high speed, whisk until mixture is fluffy, pale yellow.

One cakes have cooled, brush tops of each evenly with coffee-marsala syrup; repeat until all syrup has been used. This will take a while as you'll need to wait for each addition of syrup to be absorbed before adding the next addition. Be patient-- you really do need the full amount of syrup on each cake for it to have the right amount of flavour. After the final brush of syrup, allow cakes to sit for further 30 minutes.
With an electric mixer on medium speed, whisk heavy cream until stiff peaks form (be careful not to overbeat, or cream will be grainy). In another bowl, whisk together mascarpone and icing sugar until smooth. Gently fold whipped cream into mascarpone mixture until completely incorporated. Dollop or pipe frosting onto cupcakes. Dust generously with cocoa powder. 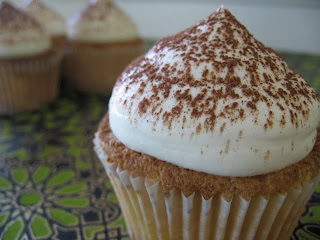